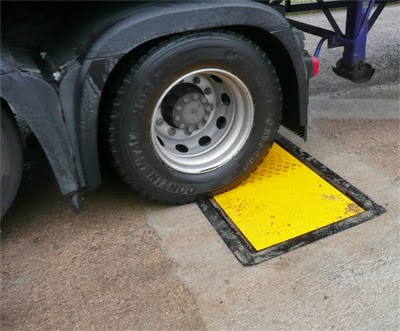 In-motion weigh scales are devices that are designed to measure the full weight of a vehicle as it moves through the measuring site (or in most cases, passed over the scale.) This advanced kind of weigh scale system does not require vehicles to come to a complete stop. Most in-motion scales only require the vehicle to slowly pass over the unit to make accurate weight calculations.

This technology is very useful because it allows vehicles to keep moving, helping operations increase throughout in their weighing processes. As a result, in-motion weighing technology is being integrated on many different applications, spanning from portable truck scales (or weigh pads) to in-motion rail scales on train track.

The Technology Behind In-motion Weigh Scales

The technology that is applied to these devices is high-end technology. Its sensors, primarily made of quartz crystals and placed on ground level, sense only the normal force that acts on the sensors (i.e. the force perpendicular to the ground, vertical force). Thus, the speed and the friction are not measured, leaving space only for the vehicles weight.

The quarts apply some electric charge that is proportional to the vehicle’s weight force. Through the use of physics, scientists have managed to form a formula to calculate the weight using that technology. But weighing in motion (WIM) devices are not all made of the same technology. There are several kind of WIM units.

Below are a few of the most common applications of in-motion weighing scales:

1. This technology can also measure train’s weight. Otherwise known as in-motion rail scales, these simple systems are deployable within 30 minutes and requires no maintenance. The revolutionary and enhanced algorithms that are encompassed in the WIM’s software allow for a very accurate measurement. In-motion rail scale systems allows for a very quickly and accurate measurement of rail assets.

2. Additionally, this technology is very useful in highways. This technology allows the measurement of vehicle’s weight that pass through a certain place without stopping the traffic. The device will detect the vehicles that have broken the regulations and will automatically notify the officers in charge of the vehicle’s location. Then, the officer will take care of the problem.

3. Another use of this technology is in-motion on-board scales. There are thousands of loaded trucks that send and receive supplies daily. All of them must be measured, a process that takes time. But, thanks to the innovative WIM on board scale technology, it now takes much shorter time.

These devices are implemented within the truck, conveyor belt, or any other kind of equipment, and the sensors wirelessly inform the software about the weight of the products. This saves time and money as well. Most of these on-board scale products are cost efficient. Their price ranges from several hundred to a few thousand dollars.

4. Lastly, this technology is getting implemented in airports as well. While the plane moves through the sensors, they measure the weight and compare it to the pilot’s log in order to make sure that there is enough fuel to reach the destination. This saves lots of time.
Posted by Unknown at 11:40 AM