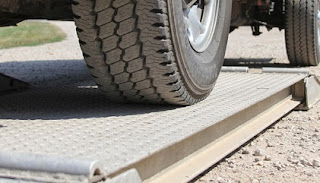 Even more, there are several reasons why it's a good idea to ensure truck compliance to weight regulation. Weigh-in-motion technologies allow trucks and other transport vehicles to be weighed directly in the traffic flow, without any stoppages and disruption to operations. As overloaded trucks and transport vehicles pose serious threats to road transport operations, it can increase risks for road users and cause severe impacts on the durability of infrastructure and the vehicle itself.

When it comes to monitoring road traffic loads, attention is now mainly focused not only on basic vehicle weight but also on axle and wheel load. That said, an overloaded truck is more likely to be involved in an accident and have more severe consequences than a properly loaded truck. The heavier the truck, the higher inertia, which may result in stronger forces and damage - to other vehicles or to the infrastructure.

Generally speaking, when the current load exceeds the maximum permitted limited of a vehicle, several consequences may occur.

In the first place, an overloaded truck is often less stable because of the increased height at the center of gravity and more inertia of the vehicle bodies. Additionally, the braking system of any vehicle is designed for the maximum allowable load indicated on the documents. Any weight in excess will reduce the braking capacity of your vehicle and may even damage the braking system.

An overloaded truck becomes underpowered, which results in lower speeds and longer overtaking, with a higher risk of tire blowouts. That said, overloads can even induce tire overheat. When flammable or hazardous goods are transported in a truck, overloads located in the truck increase both he risk and severity of a fire, due to accident and loss of control of a vehicle.

There are three primary types of weigh-in motion axle scale systems. These include, but are not limited to:

High speed weigh-in-motion axle scales are often used as a pre-selection system for low speed weighing stations. This in-motion truck scale system connects with the weight measurement sensors, loop detectors and control units located in a cabinet placed beside the road. This system enables weighing of the vehicles while they are enroute without hindering traffic system.

Another weigh-in-motion axle scale system is a low speed system. This system is used in applications in which vehicle weights must be determined accurately such as road side control stations provided by legal authorities, vehicle inspection stations operated by public or private establishments. This system usually consists of weight indicator, computer and scale programs.

There is a third category of weigh-in-motion systems and it's a portable one. This category of portable truck axle scales provides accurate weights for large off-road vehicles. Compared to the first two solutions, the portable in-motion axle scale is actually ideal for weighing in off-road conditions - that said in bad weather and terrain conditions. The best example of a portable weighing system is AXW-Series Axle Scales. This system is built from a single piece of aluminium, providing lightweight portability and exceptional environmental protection.
Posted by Unknown at 1:16 PM